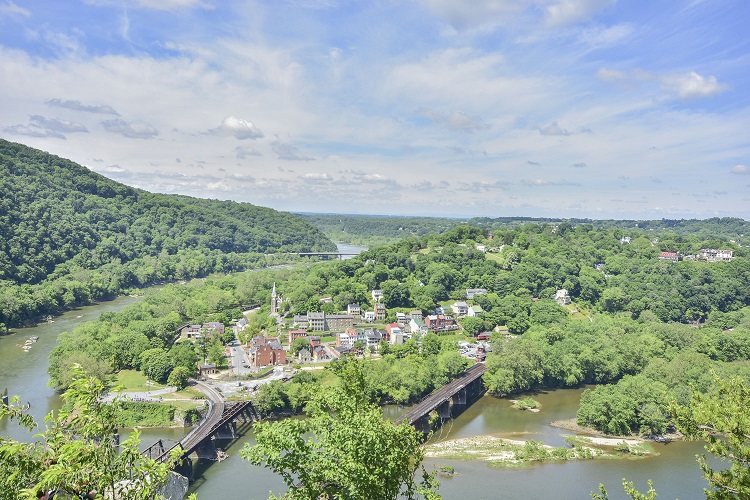 Step into the past at this quaint town of Harpers Ferry in West Virginia.

Considered to be the easternmost town in the state, it is surrounded by the beautiful scenery of the Appalachian Mountains and sits between the Potomac and Shenandoah rivers.

The natural beauty of the area makes Harpers Ferry a very desirable place to live, but it also offers the convenience of being just over an hour from cities such as Baltimore, Maryland, and Washington, D.C.

Before it became the Harpers Ferry it is today, it was spelled Harper's Ferry with an apostrophe. In the 18th century, Robert Harper established a ferry service at “The Point” where the Shenandoah and Potomac Rivers meet. In 1763, the Virginia General Assembly gave the site the name of “Shenandoah Falls at Mr. Harper’s Ferry,” which eventually became Harpers Ferry.

Harpers Ferry also possesses a rich history and is best known for being the site of John Brown’s infamous raid in 1859. This small town had a crucial part in the United States history, way before it was separated from Virginia during the Civil War. No wonder, the readers of WV Living voted it as the “Best Town for History” for consecutive years now.

Homebuyers interested in buying a home in Harpers Ferry will love the historical character and charm of this town, as well as the broad price range of its real estate. This town consists mainly of single-family homes. The proximity of Harpers Ferry to larger metro areas also lends itself to being the perfect choice for commuters, making this town a great choice for anyone looking for a peaceful home base and easy access to the city.

Aside from being a quiet residential community, Harpers Lee seamlessly blends nature and history within the headquarters of Harpers Ferry National Historical Park. This national monument attracts more than half a million people annually. It showcases a series of museums, monuments, and historic buildings associated with the raid, the Civil War, and other aspects of the region’s history.

History buffs will also love the dozens of historic structures in the Historic District such as the Civil War Living History Museum, John Brown's Fort, and John Brown Wax Museum. Don’t forget to include the guided tour of the site of the Battle of Bolivar Heights.

There are selections of fun events and entertainment options, like ghost tours of the town. The Historic Harpers Ferry Foundation and private companies can take you on a 2-hour spooky walk through the historic Lower Town of Harpers Ferry.

This town also benefits from the gorgeous countryside, with plenty of outdoor activities to enjoy. The area offers exciting activities like whitewater rafting, mountain biking, and rock climbing, as well as more relaxing hobbies like fishing, canoeing and hiking.

The downtown area of Harpers Ferry also provides shopping and dining options, and with Charles Town just 6 miles away, there are even more shopping centers and amenities close at hand. The convenience and history of Harpers Ferry make it a great place to live, work, and play.

If these are what you’re looking for in your next home, we at ERA Liberty Realty are glad to assist you in your home buying. Let’s talk!

The eastern gateway to the mountain state of West Virginia, Jefferson County welcomes you with its quaint towns, famous historical sites, and scenic beauty rich with recreational opportunities. It’s strategically situated only 60 miles from downtown Washington DC and 45 minutes' drive away from Dulles Airport. Tourists from the surrounding metros flock to the county to escape the fast-paced city life – either to slow down for a quick romantic weekend getaway or revel in a local festival.

What was mainly hunting grounds for the native Americans and an agricultural district throughout the late 1800s to 1900s has turned and expanded to residential communities. It’s also an ideal site for business opportunities because of its large pool of skilled workforce, lower cost of living, cheaper land, utilities, and taxes.

Named after Thomas Jefferson, Jefferson County will take you back in time. It’s the home of possibly the oldest town in West Virginia. It also has deep ties with the Washington family with the town that Charles Washington, George Washington’s brother, established.

Most especially, the Civil War left a huge impact on Jefferson County. It’s evident with historical makers throughout the county. Different museums display artifacts in this pivotal period in our nation’s history. Who would’ve forgotten about the historic abolitionist John Brown’s raid, trial, and death? When the war ended, Storer College became the first higher learning institution for African Americans.

There are no dull moments in Jefferson County especially when it has municipalities including its county seat Charles Town, Shepherdstown, Harpers Ferry, Ranson, and Bolivar.

Where the past and present meet halfway, that’s where Charles Town is. As mentioned earlier, Charles Washington founded this town three centuries ago. Stroll through its historic downtown and check out his restored home, Happy Retreat. On the other hand, John Brown’s legend was punctuated at the Jefferson County Courthouse in 1859. Join the West Virginia Historic Theatre Trail and stopover at the eclectic art gem that is the Old Opera House. The night is equally exciting in Hollywood Casino & Inn at Charles Town Races. Try your luck either in the thrilling thoroughbred racing or at the roulette table. The dining options and live entertainment are their finest though there are also locally-owned, original shops and restaurants downtown.

Arguably West Virginia’s oldest town but Shepherdstown is Budget Travel’s one of America’s “Coolest Small Towns.” An hour's drive away from the metropolitan districts of Washington, D.C., and Baltimore, travelers can experience both the creative scene and the outdoor craze here. The performing arts and festivals are in the town’s bloodline. Don’t miss out on Shepherd’s University’s annual Performing Art Series, Appalachian Heritage Festival, and the Contemporary American Theater Festival. Up for some pumping action? Cycle on the C&O Canal towpath or kayak along the forested banks of the Potomac River, it’s your call.

Quoting Reader’s Digest “If a tech-free escape is on your agenda, skip the usual suspects and set your sights on Harpers Ferry.” Go big or go inside Harpers Ferry National Historical Park for a world of adventure. Conquer the epic Appalachian Trail hike. Get wet and wild whitewater rafting or tubing by the Potomac and Shenandoah Rivers. What’s more, Harpers Ferry was WV Living’s "Best Town for History" for six years straight. Take a ranger-guided tour of John Brown and his army’s fiery three-day walk in 1859. Drop by at the Storer College or level up your visit with a ghost tour!

This stunning property features 5 bedroom and 4.5 baths. The home sits on 3 acres of the finest land Harpers Ferry has to offer. The main house features a gorgeous front ...

Amazing opportunity to own your own 2 bedroom furnished low maintenance cabin in the woods on 3 lots for vacation, travel, rental, or year round peaceful living. There i...

Located in Conestoga Estates subdivision near Harpers Ferry on 3 beautiful acres and close to all amenities. This home offers an open floor plan with three (3) bedrooms, ...

Conveniently located in Gate 1 - This 2 bedroom, 1 bath cottage sits on a corner .80 acre lot with recent updates to include a new range hood, stove, dishwasher, refriger...

Rare Opportunity to own alongside Commuter Route US-340. Zoned Industrial/Commercial, This 2.25 acre property has tons of potential & could be utilized in a variety of w...

Welcome to this unique, environmental friendly home, This custom built “Earthship” was built with the love of nature as the center of it all. From the moment you walk in...

Build your dream home on this beautiful .75 acre lot. Community river access. Property has been surveyed with corners marked, along with markers where current owner's hou...

Picture yourself living near beautiful, historic Harpers Ferry, West Virginia, and the amazing walking trails of the Appalachian Trail. Here’s your chance to own property...

Renovated from top to bottom including mechanical systems, this home has the character and modern amenities you'll love just minutes from Rt. 340! Upon entering from the ...

Wow! an amazing opportunity to own 4 acres with river views! Current property has an older mobile home with well and septic. Live here while you build your dream home!

This idyllic property sits on 2.5 acres located in Harpers Ferry. You can easily access routes to MD, VA and DC and yet enjoy all the quiet and privacy this large home p...

Rare opportunity to position your next development or expansion vision on almost 52 acres in a highly desirable vicinity right off of RT340 in Harpers Ferry! This parcel ...

Calling all builders! HOUSE ON PROPERTY is CONDEMNED! DO NOT ENTER! Located in Shannondale Community & sold “as is”, this lot is nestled in the center of beautiful mo...